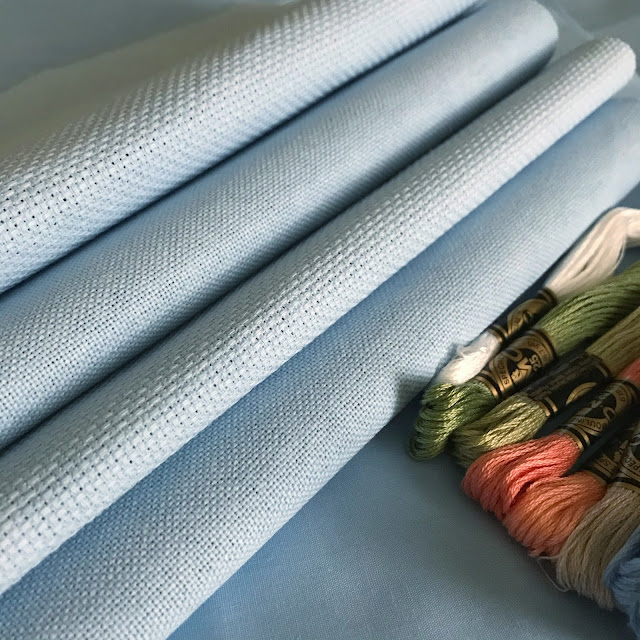 The Sense and Sensibility SAL features a hand dyed fabric in a lovely shade of antique blue. I decided to dye the fabric myself because I found that most blue fabrics were too light in color to allow the white floss featured in this design to be properly seen. Below you will find information on how I dyed this fabric so that you can create it yourself. For your reference, the closest DMC color is 827. The key to this fabric is to get an even dye with as little color variation as possible. To accomplish this you must attend to the fabric throughout the entire dyeing process. This process also requires several things that, once used for the dyeing process, cannot be used in the kitchen for any food preparation. If you are unable to acquire a pot for this purpose, you can use a different kind of container that is able to withstand boiling water. You can find measuring spoons and tongs at discount stores like Ross or Home Goods for only a few dollars and can later be reused for any future
5 comments
Read more 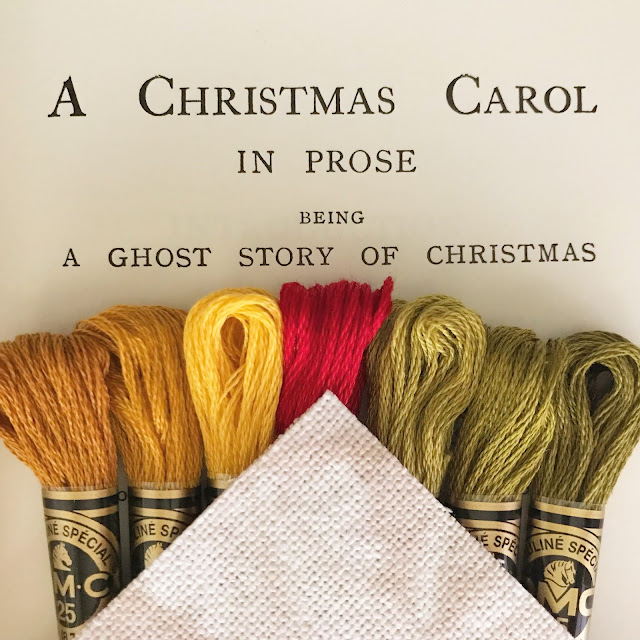 The time has come to sign up for the A Christmas Carol SAL! We are doing things very different this time around and moving our SAL over to Teachable.com. This new platform is going to allow for a much better experience all around with everything that you need in one place.  For this reading of Charles Dickens's classic, we will be stitching a small square motif featuring vintage holiday colors and a quote from the novel. Due to the short length of the novel, we will be having only one book discussion at the end of the SAL but there will be three pattern pieces, once a week, beginning December 5th. Another new addition to this SAL is a limited edition kit created by me! These kits are indeed VERY limited. I created only 50 of them -- 25 with 28 count Monaco and 25 with 14 count Aida. The kit contains a hand-dyed fabric, a decorative finishing fabric, all 7 skeins of floss needed, and a few other little goodies. The kits will be going on sale in my Etsy shop Friday, November 13, at p
2 comments
Read more 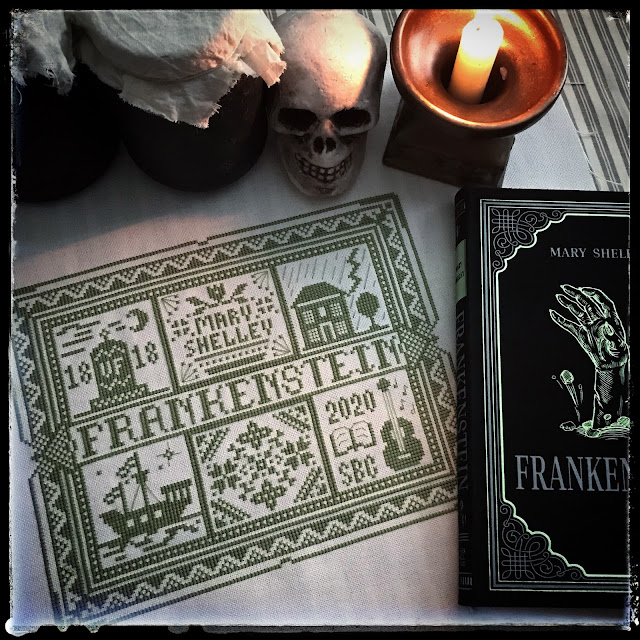 We have now completed reading Mary Shelley's Frankenstein. Below you can find all of the discussion questions that were asked during the Stitch-A-Long. If you would like to read participants' answers to these questions, you can find them on Facebook and Instagram. You can also listen to my interpretations of the novel in the video posted beneath the questions.  Part One, Letter I - Chapter 8 1. Captain Walton takes a very strong interest in Frankenstein after saving him from the ice, so much so that in his letters he describes Frankenstein in a completely idealized way. Why do you think Mary Shelley introduces us to Victor in this way? 2. What drives Victor in his scientific pursuits? What personality traits do we see early on that guide him toward his fate? And do you think he would have been less zealous if not for the loss of his mother? (This pertains slightly more to the 1831 edition of the novel, as the 1818 edition shows a young Victor that is much more restrained in his
Post a Comment
Read more 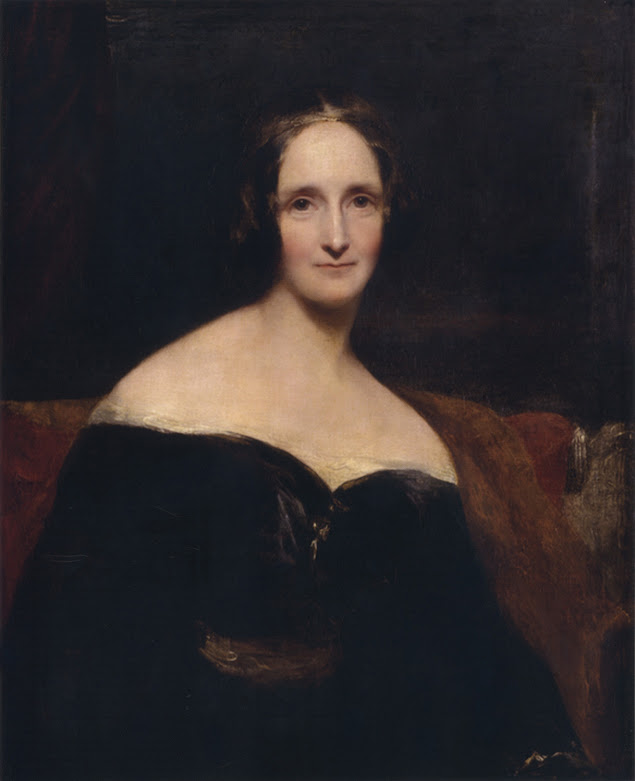 While Mary Shelley may not be a household name, for those who have found themselves wandering within the world of classic literature, the story of how Mary came to write her literary masterpiece is almost as legendary as the novel. Perhaps it is because of her young age or the real-life Gothic setting that she found herself in whilst working on the tale. Or perhaps it is because of the other famous names that crop up in the telling of it all. Whatever the reason, Mary's own personal story has become one of great interest over the years. So, let's take a look at the woman who created and unleashed upon the world, Frankenstein .   Mary Wollstonecraft Shelley (n ée  Mary Wollstonecraft Godwin) was born on August 30, 1797, to philosophers William Godwin and Mary Wollstonecraft. While her father's focus remained largely in the political world, her mother was a remarkably progressive feminist, one of the first, in fact. Her most well-known work, A Vindication of the Rights of Wom
Post a Comment
Read more

Backstitching, Long Stitches, and Couching for the Frankenstein SAL 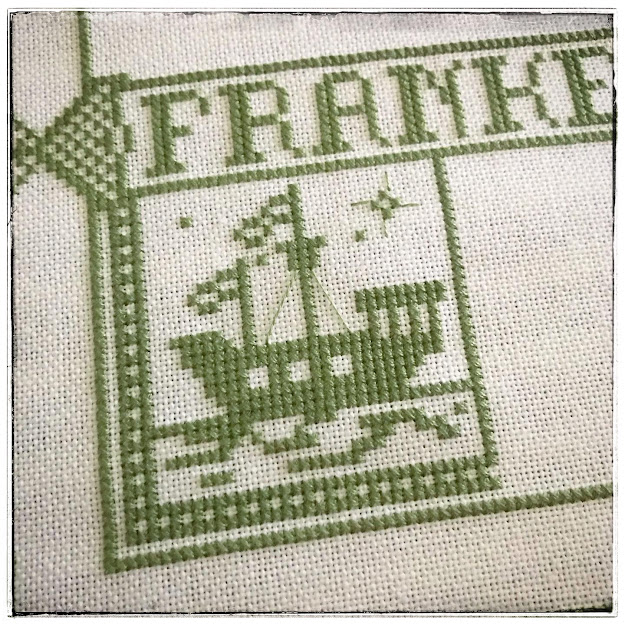 Hello stitchers! I have been thrilled to see so many beautiful finishes for Part One of the Frankenstein SAL on Instagram and Facebook. Thank you for sharing! There have been a lot of questions, however, about the backstitching and long stitches for this SAL, so here is some clarification on the subject. I also created a tutorial for all of our new stitchers that you can find in the video below which includes a tutorial on the couching method that we will be using in Part Two . First of all, for this SAL I used two strands of floss for all of the cross stitching, but only one strand of floss for all of the other detailing . As far as what stitches I used for each element, in the two blocks of Part One, everything is done in long stitches except for the window panes of the house. That means the rain, the ship rigging, and the points of the star above the ship are all completed as long stitches in the model.  The reason I chose to do the window panes as backstitches rather than continuin
1 comment
Read more 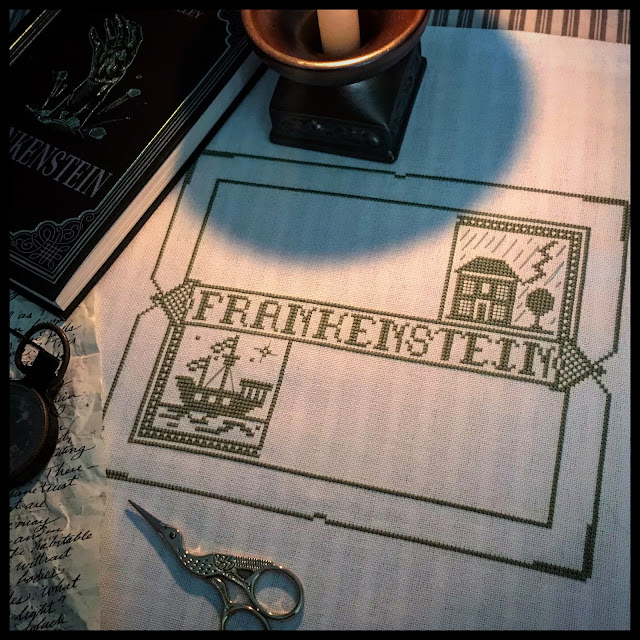 Part One of the Frankenstein SAL is now available!  This part of the stitching contains two separate blocks, each featuring important elements of the first part of the reading. For those of you who have never read the novel and are wondering why there is a ship in the design, I can assure you, it will not take you long to understand once you begin the reading! A few notes about the design: These two blocks fit snugly into the inner border. Unfortunately, with this design, there isn't much room for error so be sure to count twice so that you can stitch once.  A frequent question has been whether or not there will be any more stitching done outside of the previously released outer border. No, there will not be any stitching done outside of the border. That singular line along the outside is the very edge of the design.  Also, please note that the backstitching on the model was completed using a single strand of floss and long stitches were done without couching in these two blocks.
Post a Comment
Read more 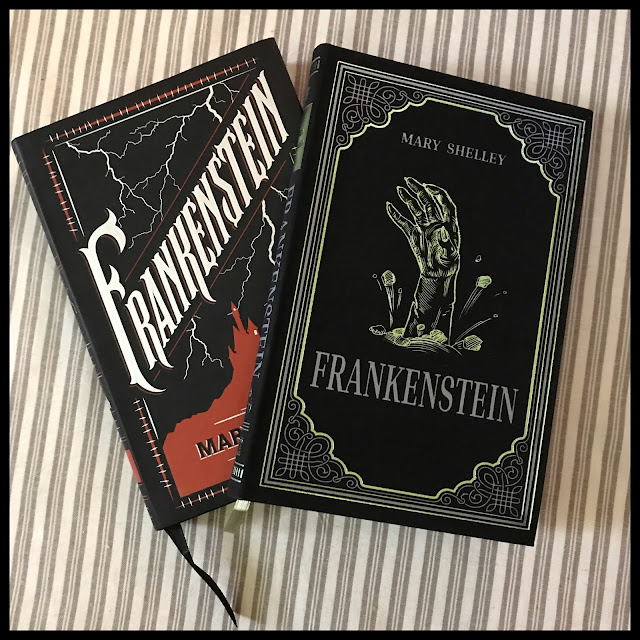 The Frankenstein SAL is almost upon us and if you have yet to pick up a copy of the novel, you may be wondering which edition you should get. Frankenstein is unique from the other novels we have explored together so far, in that there are actually different distinct editions of the novel. But worry not, I will never assign a specific edition of a novel because as a global community, we may not all have access to the same materials and I never want anyone to feel like they are unable to participate. We will simply deal with any challenges from different editions as they come up. So, please select whichever edition of Frankenstein you would like. Here is a breakdown of the different editions of Frankenstein that you may encounter: First, a little history. Frankenstein; or, The Modern Prometheus was originally published in 1818, by 20 year-old Mary Shelley, though the first edition did not bear her name. It was published anonymously and would not be credited to her until th
6 comments
Read more
More posts